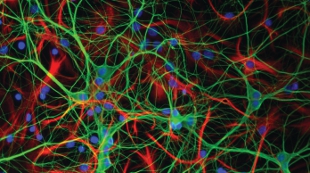 Carefully watching individual brain cells called radial glia-like (RGL) cells in the brains of mice, researchers have identified a new capability—self-amplification. The study, published last month in Cell, provides evidence that these cells can divide to create two of themselves in addition to generating both mature neurons and the surrounding support cells known as glia.

"Now we know they don't just maintain their numbers, or go down in number, but that stem cells can amplify," neuroscientist Hongjun Song, director of the Stem Cell Program in the Institute for Cell Engineering at the Johns Hopkins University School of Medicine and coauthor of the study, said in a press release. "If we can somehow cash in on this newly discovered property of stem cells in the brain, and find ways to intervene so they divide more, then we...

Song and his colleagues also examined how the RGLs were regulated, identifying a potential role for an autism-associated gene called PTEN in the quiescence, differentiation, and maintenance of adult neural stem cells.