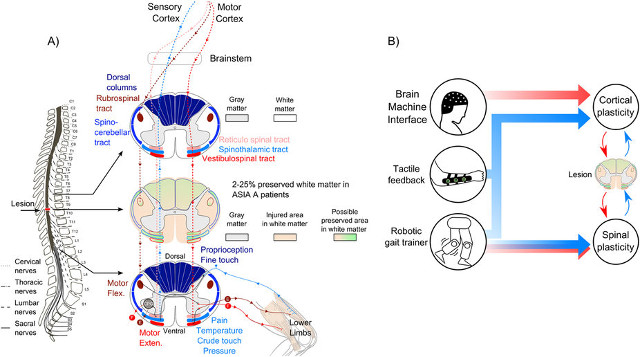 Hypothesis for mechanism of neurological improvement in spinal cord injury patientsA.R.C. DONATI ET AL., SCIENTIFIC REPORTSParaplegic patients who regularly trained with brain-machine interfaces (BMI) to walk in a virtual world or articulate an exoskeleton using their brains have regained some sensation and voluntary muscle control at sites below the spinal cord lesions that caused their paralysis, according to an international team of researchers. The scientists—among them the researchers who enabled a paralyzed man to execute the opening kick of the 2014 World Cup—reported the results of an eight-person trial in Scientific Reports today (August 11).

“Nobody ever imagined that one day we would be talking about the possibility of using brain-machine interfaces to induce partial neurological recovery in patients who have been diagnosed as having complete spinal cord injury,” study coauthor Miguel Nicolelis of the Duke University Medical Center told reporters during a conference call.

The researchers report a full 12 months of such improvement, with regular training, and Nicolelis said that the seven participants still involved in the study are continuing to regain neurological control of their bodies. (One of the study participants moved away from the study center in Sao Paolo, Brazil.)

According to Nicolelis, the team is preparing another manuscript that reports the neurological improvements exhibited by the patients over 18 months. These gains include involuntary muscle contractions, such as bowel movements.

The training initially involved patients using their brains to control an avatar on a virtual reality representation of a soccer pitch. Not only would patients control their avatars, but they were provided with tactile feedback via haptic devices that delivered stimulation to their skin. For example, when patients would have their avatar take a step, vibrations were sent to their forearms. The participants then graduated to manipulating the brain-driven exoskeleton, which also provided such tactile feedback.

“Due to the intense training over a year with this brain-machine interface—the first one to provide a very rich tactile feedback to patients in addition to video feedback—we may have triggered a process of functional reorganization in the cortex and spinal cord of these patients,” Nicolelis said. “Due to this plasticity, if there were any nerves that survived the original injury . . . we may have rekindled these remaining nerves to be able to send messages from the brain of the patients to the periphery.”

Nicolelis added that he has identified a subset of the patients to test whether the benefits of the BMI training persist even after regular training sessions stop. A study on this group, he said, is ongoing.

For now, the team noted that the new treatment paradigm, in combination with other emerging approaches, such as cell therapy, may offer hope to paraplegic patients who were previously resigned to suffer through their spinal cord damage indefinitely. “We may see in our lifetime people receiving stem cell implants and using a brain-machine interface post-surgery to improve and to potentiate the plasticity that they may get from these implants,” Nicolelis said.