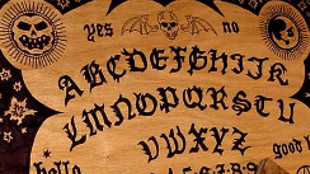 An English ouija board.Public Domain, Mijail0711As experienced mediums claim to channel dead people and other spirits, their own minds become eerily quiet, according to a new study published last week (November 16) in PLOS ONE. To conduct the study, Brazilian researchers monitored the brain activity of 10 mediums during trances in which otherworldly beings supposedly communicated—in writing—through them.

“Spiritual experiences affect cerebral activity, this is known,” Andrew Newberg, director of Research at the Jefferson-Myrna Brind Center of Integrative Medicine, said in a press release. “But, the cerebral response to mediumship—the practice of supposedly being in communication with, or under the control of, the spirit of a deceased person—has received little scientific attention.”

Newberg and his colleagues injected a radioactive tracer into five experienced and five amateur mediums right before they produced psychographs—in which a spirit writes through the hand of the medium—and used single photon...

Researchers found that during a trance experienced mediums had less activity in areas related to cognitive processing—like language, reasoning, and movement—despite writing complex content in their trance. However, the amateur mediums showed the opposite pattern, which, the researchers hypothesized, could be due to their more deliberate attempt to communicate with those from beyond the grave.