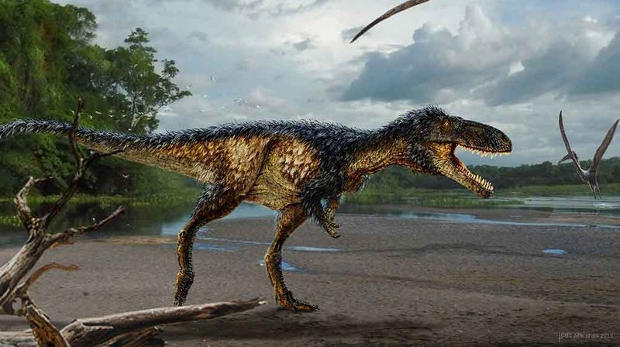 An artist's reconstruction of Timurlengia euoticaAMNH, ORIGINAL PAINTING BY TODD MARSHALLThe ancient forebears of Tyrannosaurus rex were much smaller than the fearsome dinosaur, and they likely employed some of the sensory innovations used by the notorious carnivore before evolution set them on a path towards colossal size, according to a study published in PNAS this week (March 14).

Researchers had found a couple dozen fossilized bone fragments of a dinosaur now named Timurlengia euotica in Uzbekistan from 1997 to 2006. This latest analysis of the 90 million-year-old remains, including a focused look at the animal’s braincase, suggests that the species may have shared T. rex’s acute hearing without being nearly as large as the hulking carnivore. T. euotica serves as a missing link of sorts in tyrannosaur evolution, as no T. rex ancestors had previously been described from a window of time from about 100 million to...

“This is what we’d been waiting for,” study coauthor Stephen Brusatte, a paleontologist at the University of Edinburgh, U.K., told Nature. T. rex ancestors that roamed the Earth more than 100 million years ago were small bodied, like T. euotica, but also had small heads, and likely keen smell and hearing, senses that made later tyrannosaurs effective hunters.

T. euotica’s larger braincase and well-developed inner ear—which it likely used, as did T. rex, to hear low-frequency sound— indicates that sensory development preceded large body size in the evolutionary path to T. rex. “It shows us that relatively big brains and keen senses evolved early in the history of this group of dinosaurs and may have been what allowed tyrannosaurs to become such successful predators,” Bill Sellers of the University of Manchester, U.K., who was not involved with the study, told BBC News.

But more fossils lay awaiting discovery, and T. euotica is likely just one of T. rex’s hidden ancestors. Other finds may shed even more light on how these dinosaurs developed through evolutionary time. “The new species only begins to fill in this significant temporal and evolutionary gap in the tyrannosaur fossil record,” David Evans, a vertebrate paleontologist and curator at the Royal Ontario Museum in Canada who was not part of the study, told The Christian Science Monitor. “Its contribution to our knowledge of sensory adaptation in tyrannosaurs will become clearer with more detailed studies of the brain cavity and sensory systems of more primitive tyrannosaurs in particular, and with more quantitative analytical approaches.”