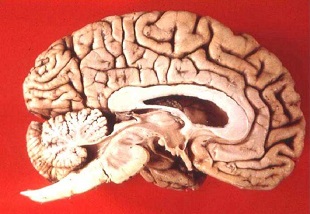 WIKIMEDIA, LOUISIANA STATE UNIVERSITY HEALTH SCIENCES CENTER, JOHN A. BEALHumans may have traded brute strength for brain power, according to a paper published this week (May 27) in PLOS Biology. A team led by Phillipp Khaitovich, an evolutionary biologist at the Chinese Academy of Sciences’ Key Laboratory of Computational Biology in Shanghai, China, studied the metabolomes of five tissues—three from the brain, plus kidney and thigh muscle—in four animals—humans, chimps, rhesus monkeys, and mice.

The team recorded 10,000 different metabolites in each kind of tissue. They found that the metabolome profile for the human prefrontal cortex was strikingly different from those of other primates, and appeared to have evolved four times as fast as that of chimpanzees in the 6 million years since the two lineages split. The metabolome profile of human muscle had evolved more than eight times as fast as that of chimps in that same...

Other researchers, like Daniel Lieberman, an evolutionary biologist at Harvard, don’t agree with the team’s conclusions. Lieberman told The New York Times that he found the research “very cool,” but suggested that early humans evolved to be excellent runners and long-distance walkers. Such abilities allowed humans to gather more food to power bigger brains, he noted.  “It may be that the human brain is bigger not in spite of brawn but rather because of brawn, albeit a very different kind,” Lieberman told the Times.