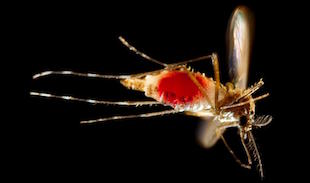 PUBLIC HEALTH IMAGE LIBRARY, JAMES GATHANYThe so-called Asian strain of Zika virus currently circulating in Brazil, which has been linked to birth defects in babies infected in utero, has been found in Africa’s Cape Verde islands, the World Health Organization (WHO) reported on Friday (May 20). It’s the first time this strain has been seen in Africa, the organization said.

“The findings are of concern because it is further proof that the outbreak is spreading beyond South America and is on the doorstep of Africa,” Matshidiso Moeti, the WHO’s regional director for Africa, said in the statement. “This information will help African countries to re-evaluate their level of risk and adapt and increase their levels of preparedness.”

According to the WHO, as of May 8, there were 7,557 suspected cases of Zika virus infection in Cape Verde, which is located about 350 miles west of Senegal. Three cases of...

The virus was first isolated in Uganda in 1947, but was not known to cause birth defects until the 2015 outbreak in Brazil. Authorities didn’t know if the strain circulating in Africa was the same as the Brazilian strain until scientists at the Pasteur Institute in Senegal sequenced the virus, The Guardian reported.

“At this point in time we don’t know what the impact is going to be of this amount of Zika in Africa, whether it is going to be an outbreak the kind of which we have seen in South America, or [whether] it might be something much, much more blunted than that,” Anthony Fauci, director of the National Institute of Allergy and Infectious Diseases, told The Guardian.

The WHO called on African countries to inform pregnant women of the risks of this strain of Zika, and urge them to take steps to prevent mosquito-borne and sexual transmission of the virus. The organization also called for increased surveillance of Zika transmission and birth defects, as well as of the neurological disorder Guillain-Barré syndrome, which has been linked to some cases of Zika in Brazil.