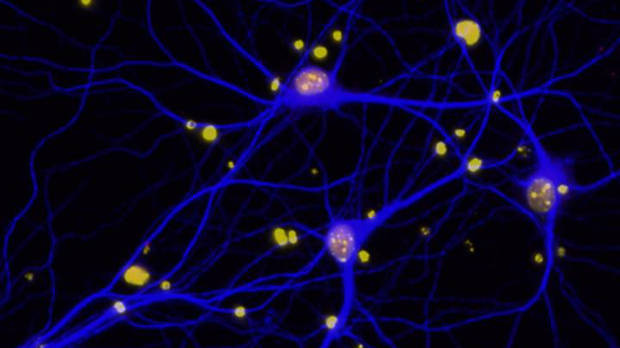 This image shows reduced levels of BRCA1 (red) in neurons (blue). ELSA SUBERBIELLEMice whose neurons harbor experimentally reduced levels of BRCA1, a DNA repair protein whose dysfunction is associated with breast and ovarian cancers, suffered increased breaks in their genomes, neuronal shrinkage, reduced synaptic plasticity, as well as impairments in learning and memory—neurological problems characteristic of Alzheimer’s disease (AD)—according to a study published today (November 30) in Nature Communications. Sure enough, the researchers also found that AD patients had greatly reduced levels of BRCA1 in their brains, compared with healthy controls.

“BRCA1 has so far been studied primarily in dividing (multiplying) cells and in cancer, which is characterized by abnormal increases in cell numbers,” study coauthor Elsa Suberbielle, a research scientist at the Gladstone Institutes in San Francisco, said in a press release. “We were therefore surprised to find that it also plays important roles in neurons,...

Growing mouse neurons in culture with amyloid-β proteins, the team further determined that these Alzheimer’s-associated proteins depleted BRCA1. The researchers are now exploring whether boosting BRCA1 levels can prevent or reverse learning and memory problems in mice. “By normalizing the levels or function of BRCA1, it may be possible to protect neurons from excessive DNA damage and prevent the many detrimental processes it can set in motion,” study coauthor author Lennart Mucke, director of the Gladstone Institute of Neurological Disease, said in the release.