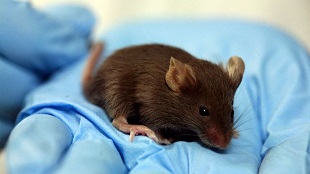 WIKIMEDIA, RAMAThe BRCA1 gene, most famous for its link to breast cancer risk, may also play a role in neural development and influence brain size, according to a study published this week (March 17) in PNAS. Researchers have long known that BRCA1-knockout mice die soon after birth, but did not fully understand why.

A team led by Inder Verma of the Salk Institute for Biological Studies in La Jolla, California, had previously seen that BRCA1 is highly expressed in the neuroectoderm, which is populated with neural stem cells. So the researchers engineered mice in which BRCA1 was knocked out in just the neural stem cells. They found that the brains of these mice were a third the size of normal mouse brains, and had especially small regions for learning, memory, motor control and sensation. Mature mutant mice had severe ataxia.

Upon closer inspection, the researchers found that...

“This is important fundamental basic science about how the genome is protected in rapidly proliferating cells in the brain,” Huda Zoghbi, a neuroscientist at Baylor College of Medicine in Houston, Texas, who was not involved with the study, told ScienceNOW.