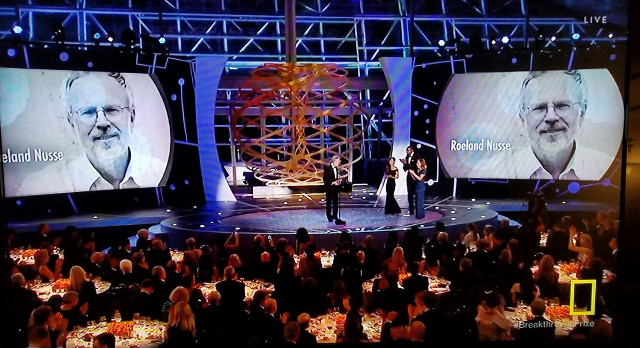 Roeland Nusse accepts a Breakthrough Prize.TWITTER, STANFORD MEDICINEStephen Elledge of Harvard Medical School, the University of California, Santa Cruz’s Harry Noller, Roeland Nusse of Stanford University, Yoshinori Ohsumi of Tokyo Institute of Technology, and Huda Zoghbi of Baylor College of Medicine have won 2017 Breakthrough Prizes in Life Sciences. Each award, given yesterday (December 4) during a televised ceremony held in California, is worth $3 million.

Elledge is honored for his pioneering work on DNA-damage response. In 2015, he won a Lasker Award for basic medical research in recognition of his achievements in the field. “I’m truly honored to receive the Breakthrough Prize,” Elledge said in a statement. “It is deeply gratifying to see the profound impact that basic research can have not only in promoting scientific knowledge but also in improving human health.”

Noller is recognized “for discovering the centrality of RNA in forming the active...

Zoghbi is honored “for discoveries of the genetic causes and biochemical mechanisms of spinocerebellar ataxia and Rett syndrome, findings that have provided insight into the pathogenesis of neurodegenerative and neurological diseases,” according to the announcement. This year she won a Shaw Prize in Life Science and Medicine. “Sometimes rare diseases can really teach you something that's very helpful for more common diseases whose development and treatment has been elusive,” Zoghbi said during the Breakthrough Prize ceremony, according to The Washington Post.

Now in their fifth year, the Breakthrough Prizes are awarded annually to highlight achievements in the life sciences, mathematics, physics, and education. Winners are chosen by selection committees made up of previous Breakthrough Prize laureates.

“There has never been a more important time to support science,” Breakthrough Prize cofounder Mark Zuckerberg, chief executive officer of Facebook, said in the prize announcement.