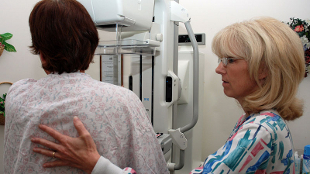 Wikimedia, US NavyScreening for breast cancer saves lives even though it can result in overdiagnosis, prompting women undergo surgery and radiotherapy for tumors that would not have caused any illness, according to a review published online this week (October 30) in The Lancet.  Thus, breast cancer screening is a worthwhile procedure, concluded a panel of British experts commissioned to help clear up a debate about the relative harms and benefits of routine screening.

Analyzing 11 randomised controlled trials that took place 20 years ago in the United Kingdom, the panel found that women whose doctors had invited them to be screened had a 20 percent lower risk of dying from breast cancer than those not invited to be screened. But using figures derived from the analysis of three relevant trials, the panel also estimated that of the 300,000 or so women aged 50-52 invited to begin screening every...

The panel concluded that screening programs in the United Kingdom probably prevent about 1,300 deaths every year, but can also lead to around 4,000 women being unnecessarily treated for benign cancers. So estimates suggest that for every death prevented, three women are overdiagnosed.

"Screening remains one of the best ways to spot the very early signs of breast cancer, at a stage when treatment is most likely to be successful,” Harpal Kumar, CEO of Cancer Research UK and a member of the panel, told Reuters. "Yet, as the review shows, some cancers will be diagnosed and treated that would never have caused any harm."

In an accompanying editorial, The Lancet said the report shows that “the UK breast-screening program extends lives and that, overall, the benefits outweigh the harms.”

Another study, presented this week (October 31) at the annual meeting of the American Society for Radiation Oncology in Boston, Massachusetts, has found that women with breast cancer who were treated with radiotherapy after breast-conserving surgery were more likely to survive than those who underwent surgery alone. But the study also found the use of radiotherapy in this group has dropped by 6 percent since 2004, leading the authors to suggest that treatment guidelines—which allow women to avoid the treatment—should be re-examined.