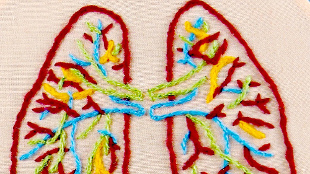 The small community of bacteria that make up the lung microbiome isn’t particularly suited for the harsh environment, but rather reflects the composition of microbial species that live in the oral cavity and reach the lung via air flow, according to a study published this week (January 20) in mBio.

Microbiome communities arise either by being selected for their adaptations to a particular environment or by drifting over to a new environment from a neighboring one, a process known as neutral distribution. Since the lung microbiome is both relatively small—with typically 1,000-fold less microbial DNA than the amount isolated from the mouth—and well-connected to other microbial communities throughout the respiratory tract, a team led by scientists at the University of Michigan hypothesized that most of the bacteria residing in the lungs came from elsewhere. To test their idea, the scientists built a model of what...

By contrast, the researchers found that in lung samples from patients with cystic fibrosis or pneumonia, the microbial populations did not fit the neutral distribution model, indicating that diseased lungs do put selective pressure on their microbial residents. “We propose that maintaining a neutral distribution of microbes in lungs may be critical for host health,” the authors wrote in their paper.