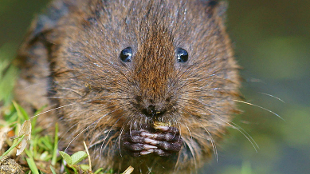 WIKIMEDIA, PETER TRIMMINGConservationists in London, England, are building a series of miniature ramps to allow water voles currently restricted to a pond to get into the Grand Union Canal, where they can enjoy manmade, vegetation-filled floating islands, reported BBC News.

As part of its attempts to arrest the decline in water voles in the United Kingdom over the past few decades, the Canal and River Trust is installing wooden ramps for the benefit of a small colony living by a pond in Ealing, west London. Currently, tall steel sheets along the edge of the adjacent Grand Union Canal prevent the voles from accessing the waterway, but the conservationists behind the project are confident the animals will soon be using their tiny bridges to expand their horizons.

If the scheme is successful, similar ramps could eventually be used across the country in an attempt to encourage the mixing of...