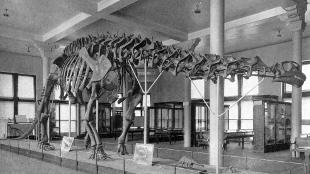 Mounted skeleton of Brontosaurus excelsus at the American Museum of Natural HistoryWIKIMEDIA, FUNKMONKIt may be time to re-rewrite the history books that had omitted Brontosaurus from the pantheon of gigantic dinosaurs, instead lumping the species Brontosaurus excelsus in with another mammoth dinosaur, Apatosaurus ajax. Researchers from Portugal and the U.K. have suggested reinstating genus Brontosaurus after analyzing hundreds of characteristics in dozens of fossil bones collected around the world. They published their results yesterday (April 7) in PeerJ.

“The differences we found between Brontosaurus and Apatosaurus were at least as numerous as the ones between other closely related genera, and much more than what you normally find between species,” coauthor Roger Benson of the University of Oxford said in a statement.

To fans and students of paleontology, the story of Brontosaurus’s demise is well known. Rivals Edward Cope and Othniel Marsh unearthed the fossilized bones...

And so it remained until yesterday. Benson and his colleagues, paleontologists Emanuel Tschopp and Octávio Mateus, analyzed several specimens of about 20 species of diplodocid, the group to which Apatosaurus, Diplodocus, and other massive dinos belong. In addition to resurrecting the genus Brontosaurus based on anatomical differences, such as Apatasaurus having a considerably stouter neck, the researchers also did some taxonomic reassignment elsewhere among diplodocids: Diplodocus hayi got its own genus, Galeamopus, and a species in genus Dinheirosaurus was lumped into genus Supersaurus.

The team’s  suggestion that Brontosaurus may be a valid genus once again is snatching up headlines across the Internet. “We knew it would be a major finding because Brontosaurus is such a popular name,” Tschopp, of Universidade Nova de Lisboa, told Nature. “I’m pretty sure there will be a scientific discussion around this. I hope there will be. That’s how science works.”

And that discussion has already begun. Many paleontologists are already chiming in. Philip Mannion, an Imperial College London paleobiologist who was not involved with the study, told Science that he welcomed Brontosaurus back into the taxonomic fold. “Brontosaurus has a prominent place in the public imagination,” he said. “It can only be a good thing that it is back with us. . . .  It shows that science develops through time and that it’s possible to change our minds, even about long-held views.”

John Whitlock of Mount Aloysius College told the The Washington Post that this latest analysis could raise the broader issue of quantifying genera-defining characteristics. “It’s going to be a long time before we get there, probably, but this paper is a big start in terms of getting the debate going,” said Whitlock, who also was not involved with the study. “At the end, though, we’re going to be in a much better place in terms of truly understanding the evolution of the lineages we study, and that’s exciting.”