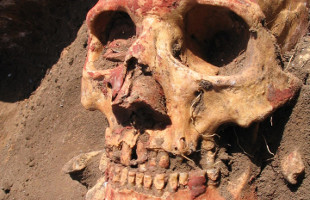 Plague bacteria (Yersinia pestis) were recently discovered in Bronze Age skeletons, pushing back the recorded origin of plague by about 3,000 years. The newfound ancient strains are genetically distinct from modern-day strains. An international team reported its findings last week (October 22) in Cell.

Researchers led by Eske Willerslev of the University of Copenhagen were searching for the cause of Bronze Age human migrations in Europe and Asia, circa 3,000 BC to 1,000 BC, suspecting that disease might have been a driving factor. So the team sequenced 89 billion DNA sequences from 101 Bronze Age specimens obtained from museums and excavations.

Seven of the specimens contained Y. pestis DNA. Most of the ancient bacterial genomes lacked a gene known to protect the pathogen while it’s inside the flea gut, suggesting that the plague was not spread easily by fleas. The ancient...

“It’s really cool that they can pinpoint the acquisition of key genes that allow the movement of this bacteria into fleas,” evolutionary geneticist Hendrik Poinar of McMaster University in Canada, who was not involved with the study, told Science.

“At that time we have a kind of intermediate plague,” study coauthor Simon Rasmussen from the Technical University of Denmark told Smithsonian. “These Bronze Age strains couldn't cause bubonic plague, but they caused septicemic plague in the blood and pneumonic plague in the lungs, which you can transmit through the air whenever you sneeze or cough.”