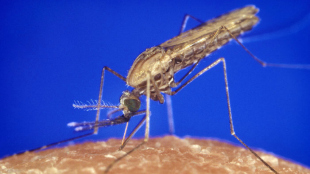 WIKIMEDIA, CDC/JAMES GATHANYDEET is a highly effective insect repellant that has been used for decades, but its expense and potential hazards have made alternatives appealing. However, “the main reason why scientists haven't been able to improve upon DEET is because they just didn't know how DEET is detected by the insects,” Anandasankar Ray, an entomologist at the University of California, Riverside, told NPR. In Nature this week (October 2), Ray and his colleagues describe the DEET-sensitive olfactory receptor in insects and how they used that receptor to screen for safer alternatives.

The researchers found that DEET-sensitive neurons in the fly antennae possess a receptor called Ir40a. Knocking down this receptor caused the insect repellant to lose its effect on the flies. Mark Stopfer of the National Institutes of Health in Bethesda, Maryland, told ScienceNews that knowing the receptor that responds to DEET “gives you another whole set of...

Ray's group then did a virtual screen for chemicals that might activate Ir40a and tested several of them as repellants. A few of the compounds turned out to be excellent candidates: they repelled mosquitoes, didn’t dissolve plastic (as DEET can), and they're already considered safe for human use. Oh, and they smell like grapes. “All three compounds activated the same antennal cells in flies as DEET,” Ray said in a press release. “What's really encouraging is that some of these compounds may be affordable to produce in large quantities.”