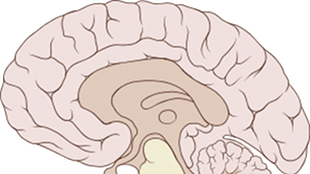 WIKIMEDIA, PATRICK J. LYNCH, MEDICAL ILLUSTRATORBrains of humans and some other mammals have intricately folded cerebral cortexes—and scientists have now identified a gene that regulates this outer brain region’s pattern of growth, according to a paper published last week (April 25) in Cell. By knocking down expression of Trnp1, the researchers were able to make normally smooth mouse brains develop folds usually characteristic of more complex animals.

“Just by varying how much of this gene is expressed, we are able to have folds in the cortex,” coauthor Víctor Borrell, a developmental neurobiologist at the Institute of Neurosciences of Alicante in Spain, told ScienceNOW.

In human fetal tissues, the researchers found that Trnp1 tended to be expressed less in regions where folding was going to occur and more in smoother regions.

The researchers said that the evolution of densely folded outer brains could have been as simple...

“These are surprising and interesting findings,” Arnold Kriegstein, a neuroscientist at the University of California, San Francisco, told ScienceNOW. “Clearly this is a model for both human as well as mouse development.”