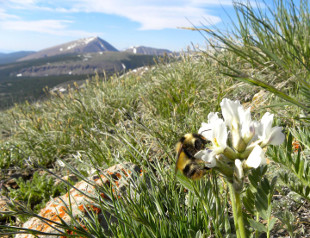 CHRISTINE CARSONBumblebee tongues are getting shorter—and it’s in part because of climate change, researchers concluded in a study published last week (September 25) in Science. In North America’s Rocky Mountains, summers have warmed up and flower populations have declined, giving bees with shorter tongues an advantage—they can access nectar from many types of flowers, whereas specialized bees with longer tongues are limited to flowers with a specific shape.

A team of researchers led by Candace Galen of the University of Missouri investigated how bumblebees in the Rocky Mountains were coping with documented flower declines in alpine areas; researchers have correlated the floral declines with higher summer temperatures that dry out the soil. The team measured changes in tongue length in two bee species. “Bumblebees with longer tongues specialize on flowers with deep, long tubes, while short-tongued bumblebees, in contrast, are generalists and tend to alight on a variety...

Galen and her colleagues used 170 specimens kept in the University of Colorado Entomology Museum and other collections. The specimens were collected between 1966 and 1980, and between 2012 and 2014. The researchers discovered that average tongue length decreased by 24 percent over the 40-year period. “If there had not been that historical record, we would have completely missed that these bees might have been evolving,” Jeremy Kerr, an ecologist at the University of Ottawa in Canada who was not involved with the work, told Science.

When looking at the flower diversity in the study area over the same time period, the research team discovered that the bees’ preferred flower populations had declined, creating an advantage for the bees with shorter tongues. “It’s one of the best examples of the effect of climate that I’ve seen,” Sydney Cameron, an entomologist at the University of Illinois at Urbana-Champaign who was not involved with the work, told Science.

“On the brighter side, our study suggests that these bumblebees are able to adapt to their changing environment, provided they have enough time and variation in their traits to do so,” study coauthor Nicole Miller-Struttman told Nature.