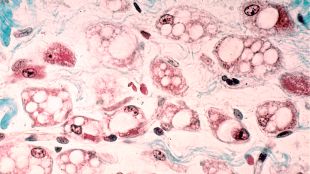 WIKIMEDIA, LUCASMCORSOScientists have been searching for chemicals or conditions that can stimulate the activity of energy-burning brown fat as a potential means of treating obesity. Adult humans, unlike babies and some animals, don’t have too much brown fat to work with, however. Now, researchers in Texas have found that humans—victims of extreme burn trauma, in particular—can actually convert white fat into brown fat, a phenomenon previously witnessed only in animals and in vitro models.

“We think in these patients who have lost much of their skin, which normally helps keep us warm, white fat is turning into brown fat in an effort to increase the ability of the body to produce heat,” Labros Sidossis, a researcher at the University of Texas Medical Branch in Galveston who led the study, published in Cell Metabolism August 4, told Science.

Sidossis and his colleauges studied 42 severely burned children and six...

“The convincing thing in this study is that these people weren’t selected for any prior ability to produce these cells, and yet it seems they all showed this increase in brown fat,” Sheila Collins, a biochemist at the Sanford Burnham Prebys Medical Discovery Institute in Orlando, Florida, told Science.

“Our study provides proof of concept that browning of white fat is possible in humans,” Sidossis said in a press release. “The next step is to identify the mechanisms underpinning this effect and then to develop drugs that mimic the burn-induced effect.”

A number of brown-fat-activating candidates have surfaced, such as shivering, certain chemicals, even brown fat transplants in animals. Last week (July 30), researchers published a study in Cell Metabolism in which 12 women ate a bile acid supplement, chenodeoxycholic acid (CDCA), for two days. The activity of their brown fat increased and their basal metabolic rate went up by about 5 percent.

“Although no long-term effects of CDCA on body weight have been described so far, theoretically a permanent 5 percent increase in resting metabolic rate could have major effects on body weight regulation and metabolic health if it would not be compensated by increased energy intake,” the authors, led by Evie Broeders and Emmani Nascimento of the Maastricht University Medical Center in the Netherlands, wrote in their report.