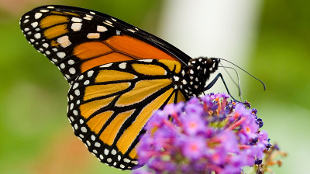 The monarch butterfly (Danaus plexippus)WIKIMEDIA, RICHIEBITSIt isn’t easy being a butterfly these days. A recent study authored by researchers in the U.K. suggests that several drought-sensitive species could suffer regional extinction if climate change and habitat fragmentation continue unabated. And a slew of papers on dwindling monarch butterflies (Danaus plexippus) disagree as to the causes and the extent of that species’ decline.

The study of U.K. butterflies, which was published Monday (August 10) in Nature, modeled future population fluctuations of six species that suffered significant collapses after a 1995 drought sapped the region. The species—which include the speckled wood, the large skipper, and the ringlet—will go locally extinct by 2100 as droughts become more common and habitat more fragmented, the researchers predicted. “The prognosis is quite bleak,” study coauthor Tom Oliver, an ecological modeler at the National Environment Research Council’s Centre for Ecology...

Meanwhile, populations of the monarch butterfly in North America are dropping for mysterious reasons. A concerted effort that resulted in eight papers published in the Annals of the Entomological Society of America last week (August 5) failed to reach a consensus on why the species is declining. Relying mainly on volunteer counts of monarch numbers as the butterflies traverse North America, from their northern breeding grounds to their central Mexican overwintering sites, the papers vary widely in the pictures they paint. One suggested that monarch numbers in winter have plummeted over the past 20 years populations showing up at summer breeding grounds have been unaffected. Another stated that the butterflies may be laying fewer eggs across their range, while still others found no decline in fall migrators. The studies “make me wonder if we really have the strongest evidence to be able to say we know what’s causing the decline that we see in Mexico,” Georgetown University ecologist Leslie Ries told Science.