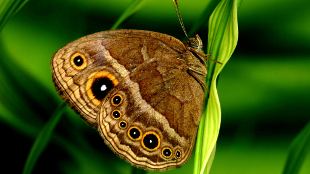 During the wet season, this Bicyclus anynana butterfly has large, bright eyespots that help it avoid the most important predator at that time—praying mantids.PHOTO BY WILLIAM PIEL, COURTESY OF OREGON STATE UNIVERSITYThe dramatic eyespots that festoon the wings of some butterfly species can be extremely effective at deflecting predatory attacks away from vital body parts, according to a Proceedings of the Royal Society B study published today (November 12). Researchers led by Oregon State University entomologist Kathleen Prudic studied the effects of eyespots on the wings of the squinting bush brown butterfly (Bicyclus anynana), which switches from diffuse, less-pronounced spots in the dry season, to dramatic wing spots in the wet season.

“Eyespots are conspicuous, they draw your attention and are thought to be used by many animal species to avoid death or attack, by either startling or confusing the predator,” Prudic said in a statement...

Prudic and her collaborator found that the dramatic eyespots on the wings of Bicyclus anynana individuals in the wet season were more effective at fooling mantid insects, the butterflies’ main predators during rainy times, than the more diffuse wing spots of the dry season forms, which are preyed upon mostly by birds. The researchers even found that pasting wet-season spots onto dry-season butterflies had the same effect. Conversly, dry-season patterns served to conceal the butterflies better from birds in its eastern African woodland habitats. “Having the right type of eyespot in the right season allowed the butterflies to live long enough to lay eggs and have more offspring in the next generation,” Prudic said. “With the wrong eyespot at the wrong time, they were quickly annihilated by the mantids.”

The new findings mean that the butterfly’s eyespots serve a dual purpose: predator avoidance and mate selection. A paper published in 2002 reported that female Bicyclus anynana butterflies chose mates based on the size of their spots.