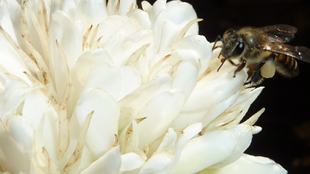 A honeybee visits a coffee flower.GERALDINE WRIGHTHoneybees may remember flowers better if they include a dose of caffeine in their nectar. The caffeine is acting pharmacologically in the bees’ brains to enhance memory formation, according to a study published in Science last week (March 7).

“We show that caffeine—a compound whose ecological role is mainly to deter and poison herbivores—actually acts like a drug in an ecologically relevant context,” Geraldine Wright, a neuroscientist at Newcastle University and lead author of the study, told National Geographic. “The plant is secretly drugging the pollinator. ”

The researchers selected three species of coffee plants and three citrus species (grapefruit, pomelo, and mandarin orange)—plants known to be caffeine-producers—and tested them to see if their nectar was caffeinated. They found that, indeed, the nectar consistently had small amounts of caffeine.

To test bees’ response to caffeine, the researchers did a classical conditioning...

The researchers then tested the effects of caffeine on the Kenyon cells in the bees’ brains, which are involved in integrating sensory input and forming memories. By measuring the cells’ electrical currents, the scientists found that they were more excitable in the presence of caffeine, which would make them more likely to fire in the face of sensory stimuli and potentially help form memories.

The plants are likely benefitting from their caffeinated nectar if it increases bee visits, the authors said. They noted that the caffeine concentrations of citrus and coffee plant nectar they measured never exceeded the threshold at which its bitterness turns bees off, even though caffeine in other tissues of these plants frequently exceeds this point. This indicates that the plants’ level of nectar caffeine has adapted to suit the bees.