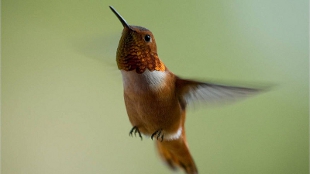 A male rufous hummingbird, one of the US species most at risk from climate change, according to the National Audubon Society's reportWIKIMEDIA, DOLOVISBy the end of this century, more than 300 bird species that call the United States home could be displaced or wiped out thanks to climate change, according to a report released Monday (September 8) by the National Audubon Society. Thirty species, including the northern gannet, the trumpeter swan, the rufous hummingbird, and the northern hawk owl, may be squeezed from 90 percent of their current territory, the report said. “Common sense will tell you that with these kinds of findings, it’s hard to believe we won’t lose some species to extinction,” David Yarnold, the president of the National Audubon Society, told The New York Times. “How many? We honestly don’t know. We don’t know which ones are going to prove heroically resilient.”

“More [conservation] is needed, particularly to avoid extinctions in Hawaii and other islands,” Mark Eaton, a conservation scientist for the Royal Society for the Protection of Birds in Sandy, U.K., told Science.

Using data from annual bird count surveys and climate change models, the Audubon report estimated that, of the U.S.’s 588 bird species, 188 should be able to relocate to new habitats in the face of climate change, while 126 species would have a tougher time establishing new ranges and 28 could lose out on suitable habitats entirely. Interactive maps on the Audubon website track changes in populations in US states and Canadian provinces for a variety of bird species through 2080.