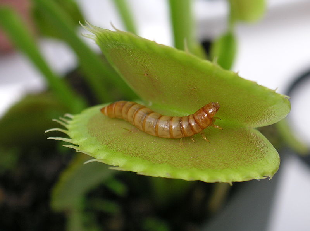 Mealworm inside a Venus flytrapWIKIMEDIA, BEATRICE MURCHDionaea muscipula, commonly known as the Venus flytrap, makes up for living in low-quality soil by supplementing its diet with nitrogen-rich insect prey. Scientists in Germany have found that the mechanical and physiological behavior of the flytraps is tightly regulated by how many times the trap’s small, mechanosensitive hairs are triggered to produce action potentials. Their findings were published last week (January 21) in Current Biology.

“The number of action potentials informs [the plant] about the size and nutrient content of the struggling prey,” said Rainer Hedrich of the University of Würzburg, Germany, in a press release. “This allows the Venus flytrap to balance the cost and benefit of hunting.”

To investigate the plant’s regulation of prey capture and digestion, the researchers attached surface electrodes to the inside lobes of the trap, and then simulated an insect’s movement by...

The team found that just a single hair-triggered action potential is enough to prepare the trap, while a second action potential right after the first causes the trap to snap shut. With subsequent hair taps, the plant’s expression of jasmonate genes increases; after five hair-induced action potentials in quick succession, the plant begins secreting digestive enzymes to break down the ensnared prey.

The authors noted that the release of enzymes is scaled to the size and strength of the insect (reflected in the number of action potentials the prey triggers), with more digestive enzymes released to break down larger or more vigorous prey. The researchers concluded in their paper that the plant maintains a “cost-benefit balance” using mechanisms driven by insect activity to govern the trap’s behavior. Unfortunately for an insect, then, struggling to escape only increases the plant’s efforts to digest its prey.

“If you just sit there and wait, the next morning, the trap will open and you can leave,” said Hedrich. “If you panic, you induce a deadly cycle of disintegration.”