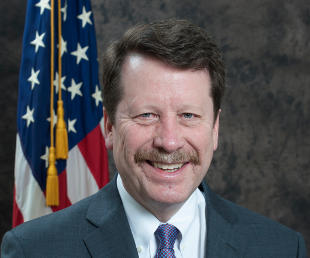 FDA, MICHAEL J. ERMARTHUpdate (May 17): Califf has taken a position with Google's parent company, Alphabet. The former FDA Commissioner wrote in a blog post that he'll be working on the Baseline project at Verily—a life science research organization also overseen by Alphabet. Baseline is an effort to track physiological parameters in about 10,000 people for four years to develop a profile of a typical healthy human being.

According to his blog, Cardiff will also maintain his work with the Duke Clinical Research Institute while also taking on an adjunct faculty position at Stanford University.

"Both giant information companies and our country’s universities—particularly those with large health systems—have critical roles to play in ensuring that all Americans, and ultimately the entire world, benefit from new knowledge and technological capabilities," he wrote. "Generating and analyzing information are not enough—we must overcome barriers to using data to improve health and healthcare."...

US Food and Drug Administration Commissioner Robert Califf vacated his post atop the regulatory agency today as Donald Trump was inaugurated in Washington, D.C. “His last day will be January 20, 2017, at noon, as per the traditional presidential transition process,” FDA spokeswoman Jennifer Rodriguez told Medscape earlier this week.

Califf, a cardiologist, enjoyed a brief tenure as FDA head after taking up the post less than one year ago—five months after being nominated by President Barack Obama—and after serving as Deputy Commissioner under Margaret Hamburg.

Rodriguez told Cardiology Today that an interim FDA head would be named soon, but offered no information as to who that might be. Traditionally, the FDA’s deputy commissioner for foods and veterinary medicine takes up the interim position. Currently that is Stephen Ostroff, who filled the interim post between Hamburg’s and Cardiff’s tenure. It is unclear, though, if Ostroff will be interim FDA head again.

Last week (January 13), the Wall Street Journal reported that Trump met with two Silicon Valley executives that he was considering as candidates for the position: Jim O’Neill, managing director of Mithril Capital Management, who held top administrative positions in the US Department of Health & Human Services under President George W. Bush, and Balaji Srinivasan, founder of the genetic-counseling firm Counsyl and cofounder and CEO of 21.co, a company that builds software and hardware to handle bitcoin payments.