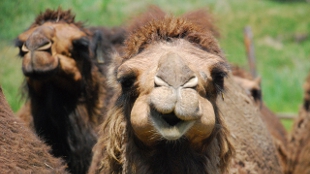 WIKIMEDIA, IRENE2005Camels shed large quantities of Middle East respiratory syndrome (MERS) virus, making them a likely suspect for spreading the deadly pathogen to humans, according to researchers at Colorado State University (CSU). Scientists had suspected that camels, which are commonly kept as pets and modes of transportation throughout the Middle East, were playing a role in the MERS outbreak that has sickened more than 900 people and killed more than 300 since being detected in Saudi Arabia in 2012.

“This is a necessary step in looking at the interaction between the virus and the host species, the camel,” Mark Pallansch, director of the Division of Viral Diseases in the Centers for Disease Control and Prevention’s National Center for Immunization and Respiratory Diseases, said in a statement. “We don’t have an effective intervention for stopping the spread of the virus other than standard hygiene precautions and avoiding contact with...

The study, which will be published in the December issue of Emerging Infectious Diseases, tracked three dromedary camels infected with the MERS virus. The animals fell ill, expelled high levels of the pathogen through their noses, and recovered in about a week. The work provides confirmation that camels can serve as a reservoir for the virus and shed it, making it possible that contact with camels may be a key contributing factor to the outbreak. “It would be very surprising, given the amount they are shedding, if they were not able to infect other camels and humans,” principal investigator Richard Bowen, a CSU biologist, said in the statement. “It strongly supports the theory of camels being the primary reservoir for this virus. Until this study, people knew infected camels shed some virus and carried it, but it was mostly circumstantial evidence.”

Researchers had previously isolated the virus from dromedary camels in the Middle East, but scientists have also found the MERS virus in bats.

Bowen and his team plan to administer a vaccine against MERS to sick camels at CSU next year to see if they can prevent shedding of the pathogen. “The concept is to vaccinate the camels to protect the people,” Bowen said. “If this is effective, we’d have tools to vaccinate camels and prevent transmission from occurring.”