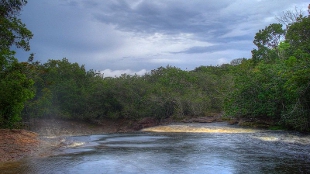 Brazilian rainforestWIKIMEDIA, SEABIRDSIn the climate change equation, rainforests have been something of an unknown. Would the increasing levels of carbon dioxide (CO2) fertilize the plants, in turn helping them draw even more of the warming gas out of the atmosphere? Or could CO2 kill the forests, resulting in the release of even more gas and accelerated global warming. Modelers working on the problem have disagreed as to the mostly likely fate of this ecosystem.

After a 2-day meeting in Washington, D.C., a group of international researchers have devised a plan to find out. They hope to build an ambitious structure that will release excess carbon dioxide throughout a patch of rainforest over the course of a decade. Modeled after similar experiments in the Northern Hemisphere, the researchers would build a ring of 16 towers, about 30 meters in diameter, around a section of the Brazilian...

The researchers estimated the project would cost about $10 million for the first phase and are looking for funding from various governments and agencies. “Let’s do it right,” Jerry Melillo, a senior scientist at the Marine Biological Laboratory in Woods Hole, Massachusetts, told Nature. “We only get one chance.”