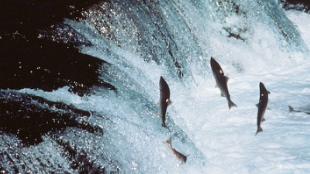 Scientists who published in Science about sockeye salmon declines were denied media interviews by the Canadian government. FLICKR, USFWS PACIFIC

In an attempt to present “one voice” to the public, the Canadian government doesn’t allow scientists to speak with journalists without extensive media relations approval. Now, both scientists and journalists are fed up.

At the American Association for the Advancement of Science (AAAS) meeting in Vancouver, a panel discussed the problem, which took effect in 2007. "This isn't about some abstract right that scientists get to chatter about," said panelist Francesca Grifo of the Union of Concerned Scientists in Massachusetts, according to...

The letter calls for a more transparent policy that allows scientists to respond in a timely matter to journalist requests—such as that in place at the US National Oceanic and Atmospheric Administration, that “even encourages scientists to express their own opinions, provided they indicate that they are speaking personally and not on behalf of the employer,” the letter says.