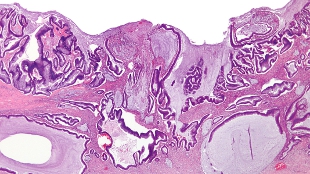 A micrograph of a mucinous adenocarcinoma of the colon, a type of colon cancer.WIKIMEDIA, NEPHRONAlleged inconsistencies and data falsification have led to the retraction of two papers on colon cancer biomarkers, according to Retraction Watch. These papers are the third and fourth yanked from the literature for the research group, formerly at Johns Hopkins School of Medicine.

One of the papers, on new biomarkers for colorectal cancer, was pulled from the March 1, 2008, issue of Clinical Cancer Research, after being cited 21 times, according to ISI. “The authors feel that the inconsistencies in the data collection and recordation warrant retraction of the article,” the coauthors of the paper wrote in the retraction notice. “Five of the 6 authors of the original article agreed to this Retraction,” they noted. “Attempts on the part of the journal office to contact the first author, Eddy S....

Leman was also lead author on the second paper, published in the June 15, 2007, issue of Cancer Research and cited 31 times, according to ISI. That paper, on other novel colorectal cancer biomarkers, was retracted for similar reasons, according to the published notice announcing its withdrawal from the journal.

Leman did not sign off on either retraction, apparently because his coauthors and the journals in question were unable to establish contact with him. These two retractions bring the total to four for the group, which comprised researchers at Johns Hopkins and the University of Pittsburgh. The two earlier retractions involved papers on prostate cancer, and all four studies, were publicly criticized by University of Toronto biochemist Eleftherios Diamandis for containing suspect methodologies.