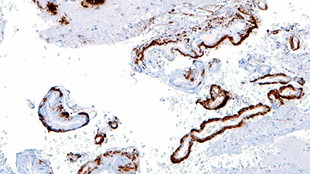 WIKIMEDIA, NEPHRONResearchers from multiple independent scientific teams have been unable to replicate findings on the effects of a cancer drug that has been touted as a promising treatment for Alzheimer’s disease. Scientists led by Gary Landreth from Case Western Reserve University published a paper in Science in February 2012 that claimed that the chemotherapeutic agent bexarotene, also known as Targretin, could reduce amyloid beta plaques by half within 3 days. But when four independent teams tried to replicate the work, they saw no effect of bexarotene on amyloid beta plaques in mice, according to technical comments published today (May 23) in Science.

“We were surprised and excited, even stunned, when we first saw these results presented at a small conference,” Sangram Sisodia of the University of Chicago, who published one of the replication attempts, said in a statement. “The mechanism of action made some sense, but the...

The new studies did replicate some findings from the paper. Sisodia’s team found that bexarotene lowered levels of soluble amyloid beta in one mouse model that they tested, while a group at the University of Pittsburgh also saw reduced amyloid beta in brain fluid in mice. The Pittsburgh group also found that treating mice with bexarotene appeared to improve their memories.

Pittsburgh’s Radosveta Kodamova was cautiously optimistic. “We should not give false promises for something that could take years to be approved,” she told TribLIVE.com. “But from an experimental point of view, it's very encouraging.”

Others who worked on replicating the study, like Robert Vassar of Northwestern University, were less sanguine. He said that many doctors are already treating their patients off-label with bexarotene, which has severe side effects, and is unwarranted especially given the new findings. “This practice should be ended immediately,” he said in a statement.

Authors of the original paper responded in Science to the new replication attempts. They said that they could not explain why their findings on plaque clearance were not reproduced but argued that the improvements in memory and cognition in the mice were real and independent of the presence or absence of the plaques. Original paper author Landreth has created a company to study bexarotene, according to Reuters, and says there will be preliminary trial results of the drug’s effects in the brains of healthy individuals by this Christmas.