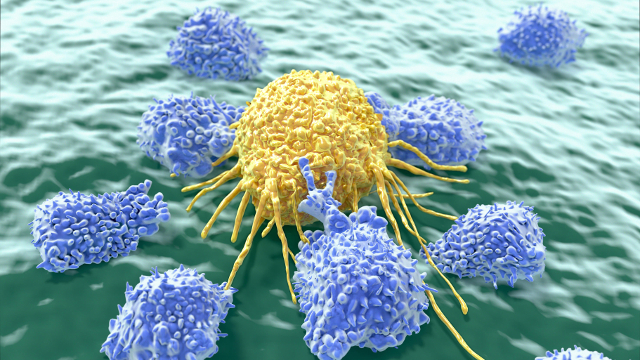 ISTOCK; SELVANEGRAAfter a seemingly successful cancer treatment, a few hearty cancer cells can remain in patients’ bodies, a dangerous persistence known as minimal residual disease (MRD). A new study, published today (October 16) in Cancer Immunology Research, finds that these cells can later respond to signals from the body’s immune system and form new tumors—and that during this recurrence, they use signals of their own to blind immune cells to their presence.

The researchers find that treating mice with immunotherapies takes the blindfolds off the immune system and enables it to fend off the tumors.

“It is becoming increasingly clear that the immune system is at the core of the puzzle of how we can treat cancer more effectively,” says study coauthor Kevin Harrington of the Institute for Cancer Research in London in a statement. “This fascinating new study helps explain why sometimes a patient’s immune system...

As the cells begin growing into new tumors, they induce nearby natural killer cells to secrete more of a signal called IL6 but less of another, IFNγ. This reaction in turn inhibits both those natural killer cells and T cells from detecting and fighting the cancer, the authors write in the study.

In addition, the team found, the surfaces of the resurgent cancer cells had high levels of the molecule PD-L1, which signals T cells not to attack. But when the mice were treated with inhibitors of either PD-1 (the T-cell receptor that interacts with PD-L1), TNFα, or natural killer cells themselves, cancer recurrence took longer or didn’t occur at all.

“The immune system goes from keeping cancer cells in check to awakening and feeding residual cells, while turning a blind eye to their growth,” says coauthor Alan Melcher of the Institute for Cancer Research, in a statement. “Excitingly, many of the methods employed by treatment-resistant tumours to re-grow and hide from the immune system can be blocked using existing immunotherapies. This idea is, in fact, supported by emerging data from clinical trials, showing that immunotherapies can reduce the risk of cancers coming back.”