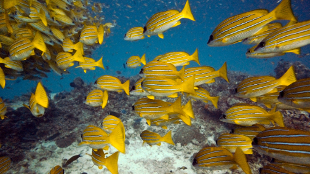 As ocean temperatures rise over the next century, fish will migrate to cooler latitudes, according to projections by fisheries scientists at the University of British Columbia (UBC). As a result, many regions of the tropics could become “hotspots” for local fish extinctions, which could in turn threaten ecosystems and human livelihoods. The results, based on climate scenarios issued by the Intergovernmental Panel on Climate Change (IPCC), were reported today (October 10) in the ICES Journal of Marine Science.

To generate the predictions, UBC researchers Miranda Jones and William Cheung modeled the effects of best- and worst-case ocean warming scenarios on the global distributions of 802 species of fish and marine invertebrates. In the best-case scenario—an increase of 1oC by 2100—species would be expected to migrate from their present ranges at an average of 15 kilometers per decade. The prediction for a worst-case situation, a 3...

“The tropics will be the overall losers,” Cheung said in a press release. “This area has a high dependence on fish for food, diet and nutrition. We’ll see a loss of fish populations that are important to the fisheries and communities in these regions.”

In contrast, fish populations and species numbers are expected grow in the Arctic and Antarctic. The effect will be greater in the Arctic because its waters are warming more quickly. “This generates new opportunities for fisheries in the Arctic,” Jones said in a press release. “On the other hand it means it could disrupt the species that live there now and increase competition for resources.”