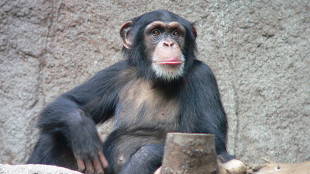 WIKIMEDIA, THOMAS LERSCHBeginning in September, research involving captive chimpanzees will require additional permits, issued by the US Fish and Wildlife Service (FWS). The agency announced last week (June 12) that both captive chimps are now protected under the Endangered Species Act, as their wild brethren have been for more than two decades. It was the only “split listing” of its kind in the history of the act, originally instituted “to allow the National Institutes of Health [NIH] to fund medical experiments using captive chimps,” according to The Washington Post.

“Extending captive chimpanzees the protections afforded their endangered cousins in the wild will ensure humane treatment and restrict commercial activities under the Endangered Species Act,” FWS Director Dan Ashe told The Washington Post. “The decision responds to growing threats to the species and aligns the chimpanzee’s status with existing legal requirements.”

The new rules were requested by primate specialist Jane Goodall and the Humane Society of the United States two years ago. Once the changes go into effect this fall, researchers will be required to obtain FWS permits to import or export chimps across US and state borders. “We have been working closely with the NIH and the biomedical research community to make sure they understand the implications of our final rule,” Ashe said at a press conference, according to ScienceInsider. “If anyone is actively engaged in chimpanzee research, they should apply for a permit now.”