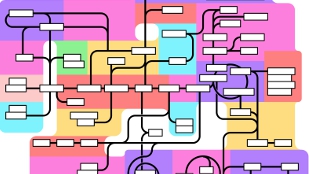 University of Leeds researcher Donald Nicholson, who charted the interactions of metabolic pathways as they were discovered over a span of 60 years, died last month (May 12), The Guardian reported.

His maps of metabolic pathways included the easier to read mini-maps, which only covered a small snippet of a pathway’s reactions, and, most recently, digitized ani-maps, animated versions of selected chemical interactions.  He started creating the maps in 1955, when only about 20 metabolic pathways had been worked out. He thought that combining the maps would be infinitely more useful to students than studying the pathways separately, and went to work collating the charts by hand on pieces of paper and printing them in an architect’s office, reported The Guardian. He was horrified when his maps were used in rote exams, preferring that they be used to help students understand rather than memorize....

He is survived by his brother, his three children, and several grandchildren. His wife Celia died in 1996. (Hat tip to GenomeWeb.)