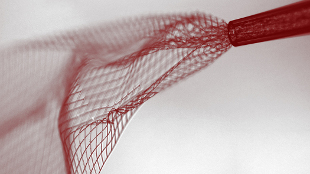 Monitoring brain activity with single-neuron resolution in living animals just became more streamlined. In a report published in Nature Nanotechnology this week (June 8), researchers at Harvard University and China’s National Center for Nanoscience and Technology in Beijing demonstrated that they could inject a flexible metal-polymer electronic mesh into the brains of live mice and use it to monitor neuronal activity.

The study builds upon work done with the electronic mesh in cell culture models. “We were able to demonstrate that we could make this scaffold and culture cells within it, but we didn’t really have an idea how to insert that into pre-existing tissue,” study coauthor Charles Lieber, a chemist and nanoengineer at Harvard said in a statement.

By tightly rolling up the electronic mesh, the researchers managed to fit it into a 100 micrometer-wide needle. The mesh then unfurled once delivered into...

The team injected these nets into the hippocampi or lateral ventricle regions of mouse brains, where they found that the devices made contacts with individual neurons. By connecting it to electrodes, the team used the mesh to monitor and stimulate individual neurons and map brain activity.

The researchers also monitored immune cell activity and found no evidence of an immune reaction to the mesh over a five week period.

“I think it’s great, a very creative new approach to the problem of recording from large number of neurons in the brain,” Rafael Yuste, director of the Neuro­technology Center at Columbia University, who was not involved in the work, told Nature.