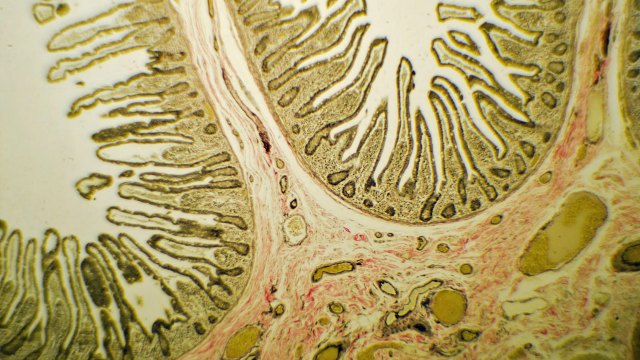 ISTOCK, WWINGResearchers have developed a taxonomy of the cell types in the mouse small intestine from more than 53,000 single-cell RNA profiles. The endeavor reveals previously unknown cellular subtypes, suggests reclassifying others, and details the changes in the lining of the small intestine during bacterial and parasite infections, according to results published today (November 8) in Nature.

“We see this atlas providing a foundation for investigating many different questions about the pathology in the gut, effects of drug-induced gut toxicities and for identifying and examining important cells, interactions, and biomarkers,” coauthor Ramnik Xavier, a member of the Broad Institute of MIT and Harvard University, says in a press release.

Xavier and colleagues collected tissue from the small intestine epithelium of mice and built transcriptional profiles using RNAseq. One of the striking revelations was the discovery of new subtypes of tuft cells, the sensory cells that bear taste receptors to detect...

The researchers also infected mice with either Salmonella or a roundworm, Heligmosomoides polygyrus, then analyzed a few thousands cells individually to look for infection-related changes. They observed a boost in the expression of genes related to inflammation and immune defense, as well as a change in the overall cellular makeup of the intestine. After bacterial infection, for instance, mice had more mature enterocytes and fewer stem cells than controls. In response to the worm, mice had more so-called goblet cells—which, the authors note, respond to the parasite—and fewer enterocytes.

“Although many studies have demonstrated that goblet cells and, more recently, that tuft cells accumulate and respond to parasites, our analysis reveals that this restructuring of the epithelial barrier is specific to the identity of the pathogen,” the authors write in their report.