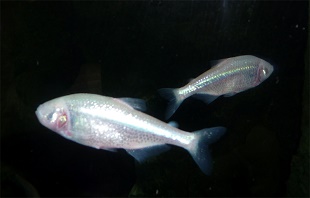 WIKIMEDIA, CITRONEyeless Mexican tetra fish lose their circadian metabolic rhythms when they live in dark caves, but surface-dwelling varieties of the same species (Astyanax mexicanus), which retain the capacity for sight, continue to respond to light and dark cycles, according to research published yesterday (September 24) in PLOS ONE.

The fish occur naturally in several forms adapted to living in caves; all are descendants of a surface-dwelling ancestor and vary from partially to completely blind. The cave-adapted fish also show a heightened reliance on taste and feel to find food or navigate and are better benthic foragers. The adaptations are important to survival: cave fish washed to the surface are more vulnerable to predators, while surface-dwellers swept underground by flooding rivers struggle to find food.

Previous studies had reported significant differences in the metabolic rates of cave versus surface fish, which led Damian Moran of Lund...

“Animals that live on the planet's surface need autonomous circadian rhythms to tune their physiology to their daily activities,” Moran said in a press release. But species that live in perpetual darkness “can save energy by not ramping up their metabolism needlessly for a day that will never arrive.”