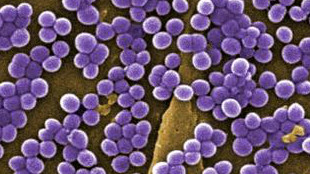 Colorized scanning electron micrograph depicting clumps of methicillin-resistant Staphylococcus aureus CDCOf the 2 million-plus people that are infected with antibiotic-resistant bacteria in the United States each year, at least 23,000 die as a result. That’s according to the Centers for Disease Control and Prevention, which today (September 16) released the first federal estimate of antibiotic-resistant infections in a comprehensive report on the subject.

“They have come up with hard numbers where it has been only guesswork,” Tufts University microbiologist Stuart Levy told The New York Times. “This sets a baseline we can all believe in.”

During a conference call with reporters, CDC Director Tom Frieden highlighted the importance of molecular detection and surveillance. “We think we will be able, over the coming years . . . to develop ways to detect resistant organisms much more quickly,” he said . . . “and to figure out how they are spreading, so we can prevent more effectively.” Better diagnostic tests, he added, “will be extremely important.”