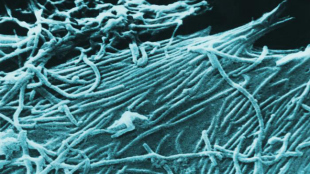 WIKIMEDIA, PLOS BIOLOGYForty-two-year-old Thomas Duncan, the man who was diagnosed with Ebola in a Dallas, Texas hospital this week after having traveled from Liberia, has been upgraded from critical to serious condition, according to the US Centers for Disease Control and Prevention (CDC). As several news outlets have reported, Duncan was not asked about his recent travel history by everyone who initially treated him and was sent home from the hospital when he first sought care for his symptoms. The CDC confirmed these reports during a press call today (October 2).

“The lessons for hospitals across the United States . . . is that they really have to take that travel history,” Texas Department of State Health Services Commissioner David Lakey told reporters. “Hospitals have to work with public health.”

“At this point the teams on the ground . . . are assessing about 100 people to determine whether or not they have had contact [with Duncan],” Frieden told reporters. “We have identified a handful of individuals who may have had exposure and therefore will be monitored.”

“We remain confident that we can contain the spread of Ebola in the United States,” added Frieden.