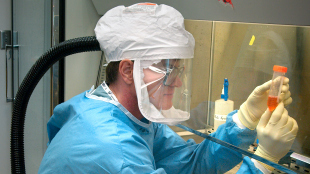 WIKIMEDIA, JAMES GATHANYA string of safety lapses at government agencies involving anthrax, influenza, and smallpox resulted in the US Centers for Disease Control and Prevention (CDC) instituting a lockdown this month on transferring certain hazardous materials among laboratories. This week (July 25), the agency announced that a tuberculosis lab could resume shipping biological materials to other labs now that it has passed a safety inspection.

“Each lab must demonstrate that its protocols for key control points—such as inactivation of a pathogen—are not only being used but that they are being used by appropriately trained and supervised individuals,” according to a CDC statement. In addition, labs must establish redundant controls and undergo unannounced inspections.

The tuberculosis lab was not involved in the recently reported cases of biosafety breakdown. The moratorium remains in place for another 22 labs. “As soon as each lab can document that policies and procedures...

The measures were put in place as a step toward cleaning up what some have called a lax culture of safety at the CDC, and the ramifications of the lockdown may be felt worldwide. CNN reported that the CDC is turning away about 100 samples a week sent in for chikungunya testing. Shaw also said that labs working on Ebola and Middle East respiratory syndrome could also feel the impact of the moratorium.