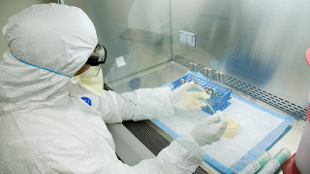 FLICKR, FDALast Monday (December 22), a technician at the US Centers for Disease Control and Prevention (CDC) may have been exposed to the deadly Ebola virus from West Africa, when samples that may have contained live virus were sent from a high-security lab to one that was not equipped to handle live Ebola. The technician who worked in the recipient lab and may have been exposed to the incorrect samples wore gloves and a gown, but no face shield, The New York Times reported. The mistake was discovered the next day and attributed to human error, according to Stuart Nichol, chief of the CDC’s Viral Special Pathogens Branch.

The safety breach comes at the end of a troubling year for the government agency. In June, as many as 75 CDC scientists were exposed to Bacillus anthracis when live samples were shipped to ill-equipped labs, and in July, a mix-up...

The technician who may have been exposed to Ebola will be monitored for 21 days, the CDC said. . Other employees who entered the lab that received the incorrect samples are unlikely to have been exposed, the agency said, and there is no risk to the public as the samples never left the CDC campus in Atlanta. “At this time, we know of only the one potential exposure,” CDC Director Tom Frieden told The Washington Post.