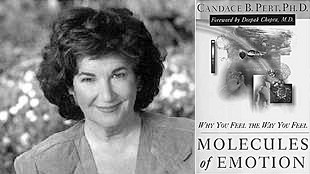 THE SCIENTIST, March 2, 1998Candace Pert discovered a receptor for opioids as a graduate student, dedicated much of her scientific career to the study of therapeutic peptides, and became known in later years for her popular books on the connection between mind and body. She died unexpectedly earlier this month (September 12) at age 67. The cause of death was cardiac arrest, according to The New York Times.

Born in Manhattan, Pert studied biology at Bryn Mawr College before completing her PhD in pharmacology at Johns Hopkins University, where she made her opioid receptor discovery. She made waves by complaining that she was not included when her advisor Solomon Snyder and others received the Albert Lasker Award for the opioid receptor work.

They later reconciled, however, and upon her death Snyder told NYT in an e-mail that Pert had been “one of the most creative, innovative graduate students...

At the National Institute of Mental Health, where she worked after receiving her PhD, Pert became interested in how neurons use peptides to communicate with one another. That work led to the discovery of Peptide T, which showed promise as an HIV drug. She and her husband, immunologist Michael Ruff, formed a company called Peptide Design in 1987 meant to bring the molecule to the clinic.

Meanwhile, Pert became a professor at the Georgetown University School of Medicine and began to explore alternative medicine concepts, such as the connection between mind and body. She gave frequent public talks and authored Molecules of Emotion: The Scientific Basis Behind Mind-Body Medicine, part memoir and part treatise on peptides and mind-body communication. “She welcomed all spiritual practice into her life, and she loved all people,” Pert’s family wrote in a statement.

Pert published another popular book, Everything You Need to Feel Go(o)d, in 2006. She and Ruff started RAPID Pharmaceuticals, a company working to develop peptide therapies for multiple diseases, the following year.

Pert is survived by Ruff, her sister, three children and one grandchild.