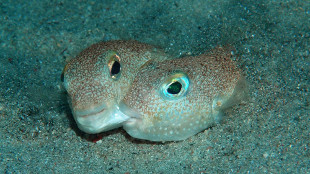 Choosing among the 18,000 new species reported in 2014, researchers have selected 10 creatures from four continents that represent the incredible diversity of life on Earth. The International Institute for Species Exploration at the State University of New York College of Environmental Science and Forestry (SUNY-ESF), which has been running the Top 10 ranking since 2008, reported their selections today (May 21).

“The Top 10 never fails to amaze every year,” said Quentin Wheeler, President of SUNY-ESF, in a video interview. “The real purpose of the Top 10 is to bring attention to how little we know about life on Earth.”

Three of the species reveal new parenting strategies. The 1.5-inch-long Indonesian fanged frog Limnonectes larvaepartus, which lives in leaves, grass, or on rocks near flowing streams, is the first frog species known to give birth to tadpoles instead of fertilized eggs or froglets. Male...

Two other species highlighted on this year’s list had been hiding in plain sight. The 5-foot-tall Mexican bromeliad plant Tillandsia religiosa, with pink spikes and flat green leaves, has long been plucked from high-elevation forests to be incorporated in traditional Christmas altar displays, while the 9-inch-long walking stick insect Phryganistria tamdaoensis was previously undocumented by scientists, despite the fact that it is strikingly common in the villages of the Tam Dao National Park in Vietnam.

The other members of the list include a 10-foot-long, 5-foot-tall, and 600-pound bird-like dinosaur, Anzu wyliei, known as the “chicken from hell” and identified from three partial fossil skeletons in the Dakotas; the critically endangered parasitic plant Balanophora coralliformis, a coral-shaped aboveground tuber with only 50 known plants in the Philippines; the tiny sea-floor-dwelling, mushroom-shaped invertebrate Dendrogramma enigmatica from Australia, which together with a second new species may represent a new phylum between the cnidarians (jellyfish) and ctenophores (comb jellies); the brilliant blue, red, and gold inch-long Japanese sea slug, Phyllodesmium acanthorinum, which may provide a missing link between sea slugs that eat corals and those that eat hydra; and the Moroccan spider Cebrennus rechenbergi, which faces threats by cartwheeling toward perceived predators at speeds twice as fast as it can run.

Each year, researchers at SUNY-ESF select a shortlist of approximately 40 candidates for the list, which the international panel of scientists then whittles down to the winners. In the last 250 years, approximately 2 million species have been discovered, but Wheeler of SUNY-ESF estimates that there are another 10 million yet to be found.  “The Top 10 is a reminder of the wonders awaiting us,” Wheeler said in the statement.

Unfortunately, scientists estimate that at least as many species are lost every year as are discovered.