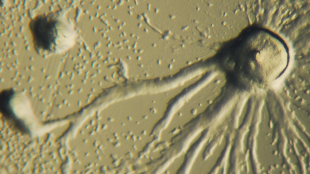 Dictyostelium discoideum exhibiting chemotaxisWIKIMEDIA, BRUNO IN COLUMBUSResearchers have long realized that cells can sense and move toward chemical stimuli. Now, investigators from the Johns Hopkins Medicine in Baltimore, Maryland, have shown that one mode of such movement depends on the cell’s cytoskeletal architecture, which is influenced by chemoattractant gradients.

Observing and modeling the activities of amoebas and human neutrophils, Johns Hopkins’s Ming Tang and colleagues found that, in the absence of a uniform chemoattractant, actin polymerization and chemotactic motility signaling is greatest on the side of the cell exposed to higher concentrations of the chemical. Their work was published in Nature Communications this week (October 27).

“Detecting gradients turns out to be a two-step process,” study coauthor Chuan-Hsiang Huang explained in a statement. “First, the cell tunes out the background noise, and the side of the cell that is getting less of the chemical signal just stops...

Meanwhile, a team led by Peter Devreotes of Johns Hopkins showed that inhibiting actin polymerization in human neutrophils led to uniform sensitivity to a chemoattractant. Their work is in press at Cell Reports.