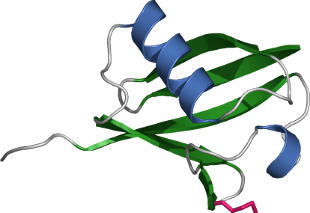 UbiquitinWIKIMEDIA, ROGERDODDCells dispose of worn-out proteins to maintain normal function. One type of protein degradation relies upon such proteins being tagged with peptides called ubiquitins so that the cell can recognize them as trash. Harvard researcher Marc Kirschner and his colleagues have used single-molecule fluorescence methods to show how an enzyme adds ubiquitins to proteins, and how those proteins are recognized and recycled in the cell’s proteosome. They reported their findings in a pair of Science papers published last week (April 10).

Aaron Ciechanover, Avram Hershko, and Irwin Rose, the researchers who discovered the process in the 1980s, shared the 2004 Nobel Prize in Chemistry for their work on ubiquitin-mediated protein degradation. But the molecular particulars of the process remained murky until last week. Kirschner and his colleagues found that an enzyme called APC/C adds ubiquitins to proteins headed for the rubbish heap in an iterative fashion, through...

“Both studies substantially enrich our knowledge of ubiquitination and degradation, reveal new properties of APC/C and the proteasome, and challenge established concepts about the ubiquitin-proteasome system,” wrote David Komander, a researcher at the Medical Research Council Laboratory of Molecular Biology in the U.K. in a commentary in Science.