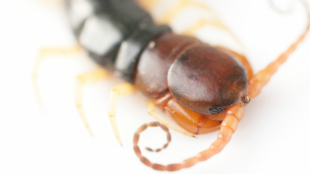 WIKIMEDIA, YASUNORI KOIDEAn alteration in a sodium ion channel can leave people completely indifferent to pain, making the channel an appealing target for analgesic development. In a report published in the Proceedings of the National Academy of Sciences this week (September 30), researchers characterize a newly discovered component of centipede venom that inhibits this particular sodium channel, NaV1.7, and works even better than morphine to dampen pain in rodents. “Centipedes worked out hundreds of millions of years ago the easiest way to catch prey was to paralyze them by blocking their NaV channel,” Glenn King, one of the authors of the study, told ABC. “We're just lucky that of the nine NaV channels in humans, it hit the one we were after.”

King, a researcher at the University of Queensland, said that other attempts to bind the NaV1.7 channel blocked other sodium...

Of course, a number of studies will have to validate the safety and efficacy of the drug before it could be used to treat pain in humans. Already, several venom-derived peptides have been developed for human therapy. King envisions that centipede venom could be useful in treating chronic pain. According to The Australian, it will be critical to “get the dose right” so that people could still feel a burn, for example. “But they wouldn’t have this ongoing pain, often resulting from a nerve injury or something that just hasn’t been dampened down by the brain,” King told The Australian.