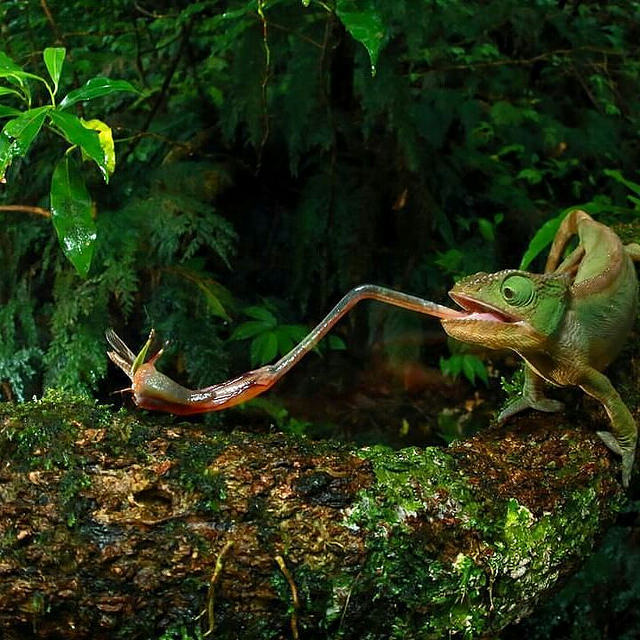 FLICKR, JUGENDPRESSE DEUTSCHLANDChameleons can nab their prey with just their projectile weapon of a tongue. But scientists have puzzled over how the tongue grips its meal, hypothesizing that it might be studded with suction cups or Velcro-like hooks. But, the answer, it turns out, lies in the chameleon’s powerfully viscous spit, researchers reported Monday (June 20) in Nature Physics.

The finding was “completely unexpected,” study coauthor Pascal Damman of the University of Mons in Belgium, told The Verge.

The team collected saliva by tempting Chamaeleo calyptratus with crickets placed behind glass microscope slides. When the chameleon launched its tongue, it would hit the glass, leaving some of its mucus behind. The researchers could then test its stickiness: on an inclined plane, they rolled steel beads through the saliva to see how much it slowed the beads down.

On average, the saliva’s...

“It’s the equivalent of a human eating a 25-pound hamburger, and then having to transport that burger to your mouth using only your tongue,” Kiisa Nishikawa, a biomechanics researcher at Northern Arizona University, who was not involved in the study, told National Geographic.