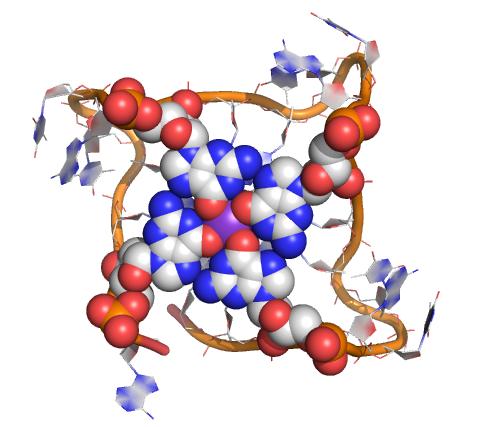 DNA quadruplexIMPERIAL COLLEGE LONDONMost DNA exists in the classic Watson-Crick double helix. But throughout the genome, researchers have found knot-like structures made of hydrogen-bonded guanine tetrads known as quadruplexes. Why these knots form and how they work is still largely mysterious, but these structures are known to affect gene expression and genomic stability. Recent research has also suggested that quadruplexes are particularly prevalent near oncogenes, suggesting they may play a role in the development of cancer.

In a study published this week (September 9) in Nature Communications, researchers in the U.K. presented a novel fluorescent molecule that can tag the structures in living cells by glowing for longer when bound to quadruplexes than when bound to double helical DNA. The researchers reported an ability to visualize when the fluorescent tag was displaced from a quadruplex by another molecule, allowing them to screen for new compounds that also...

“Until now, to image quadruplexes in cells researchers have had to hold the cells in place using chemical fixation,” Arun Shivalingam, who participated in the research during his PhD work at Imperial College London, said in a press release. “However, this kills them and brings into question whether the molecule really interacts with quadruplexes in a dynamic environment.”

“We’ve shown that our molecule could be potentially used to verify in live cells and in real time whether potential quadruplex DNA binders are hitting their target,” added coauthor Ramon Vilar of Imperial College London. “This could be a game changer to accelerate research into these DNA structures.”

Meanwhile, another UK research team has developed a technique to map the presence of DNA quadruplexes in the genome using high-throughput sequencing and noting when sequencing quality dropped, an indication that DNA polymerase has stalled. The group found more than 500,000 quadruplexes in human B lymphocytes, some 70 percent of which were not predicted computationally. The DNA knots were particularly common in gene regulatory regions and in cancer-related genes such as BRCA1, BRCA2, and MAP3K8. The researchers published their results in Nature Biotechnology this summer (July 20).

These new methods should help researchers nail down the function of these unique DNA structures—and potentially use that knowledge to their advantage. “What I’d like to understand is whether this link to G-quadruplexes, cancer, and all the genes that may be players in the process could present an opportunity for a therapeutic paradigm,” the University of Cambridge’s Shankar Balasubramanian, who led the sequencing study, told Nature Methods.