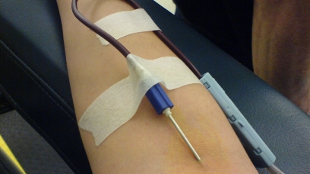 WIKIMEDIA, WALDSZENENA 10-year, $31.6 million study has found that patients who receive weekly infusions of a chemical that purportedly soaks up metal ions from the blood are less likely to suffer repeat heart attacks. But the trial, which was funded by two National Institutes of Health centers—the National Center for Complementary and Alternative Medicine (NCCAM) and the National Heart, Lung, and Blood Institute (NHLBI)—is being criticized by researchers who are taking issue with the study, its investigators, and its funders. The treatment, called chelation therapy, has long been considered a fringe medical procedure, but is popular in the United States, with more than 110,000 patients undergoing the treatment every year. The new trial found that weekly infusions of a chelating agent called salt of ethylenediaminetetraacetic acid lowered the risk of repeat heart attacks in more than 1,700 patients, though chelation therapy has been linked to heart attacks and death...

Cleveland Clinic cardiologist Steve Nissen has spoken out about the trial's co-investigators, noting that about 24 of them have been disciplined by state medical boards for insurance fraud and providing ineffective treatments, among other missteps. “They offer aromatherapy, crystal therapy, and every imaginable wacky form of medicine,” Nissen told Nature. “You can’t do high-quality research at sites like that. We wasted $30 million and 10 years on an unreliable study.”

Critics also faulted NCCAM, which often justifies its $128 million annual budget by touting its ability to scientifically debunk unproven and unapproved therapies, for funding the study. “Even if you did pristine research under the NCCAM,” Yale University neurologist Steven Novella told Nature, “it’s what you’re studying that is the problem.”

Nissen offered a dire warning if the results of the trial, which were presented at the annual meeting of the American Heart Association earlier this month, are taken seriously. “Public harm is going to come out of this. People are going to get bilked out of a lot of money," he told Nature. "People are going to die."