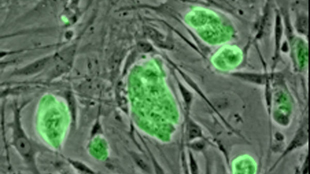 Scientists first developed the ability to reprogram somatic cells into pluripotent stem cells—cells that could give rise to any of the body’s cells types—in 2006. However, the technique has required the insertion of “master genes” that could increase the risk of mutations and cancer, limiting its potential clinical applications. A new study published Thursday (July 18) in Science demonstrates the creation of pluripotent stem cells in mice using a cocktail of small molecule compounds that can substitute for the potentially dangerous genes.

Though scientists have steadily reduced the need for additional genes to trigger pluripotency, one gene, Oct4, has been indispensable. Researchers led by Hongkui Deng at Peking University spent a year screening 10,000 compounds that would facilitate the reprogramming of mouse somatic cells into pluripotent cells without the need of Oct4. They identified a combination of seven small-molecule compounds that...

The researchers demonstrated that CiPSCs were indeed pluripotent by introducing the cells into developing mouse embryos. The resulting animals showed signs that CiPSCs gave rise to all major cell types, including brain, heart, liver, skin, and muscle.

“People have always wondered whether all factors can be replaced by small molecules. The paper shows they can,” Rudolf Jaenisch, a cell biologist at the Whitehead Institute at the Massachusetts Institute of Technology, told Nature.

The team described several advantages of using small molecules for reprogramming: they don’t impact the immune system, they are cost effective; they are easily synthesized and preserved; and they pass through cell membranes easily, meaning they can be washed away after initiating reprogramming.

Sheng Ding, a reprogramming researcher at the Gladstone Institutes in San Francisco, told Nature that the study reflects “significant progress,” but thinks that chemical reprogramming will not be widely used until the method is applied to human cells, not just mouse cells.