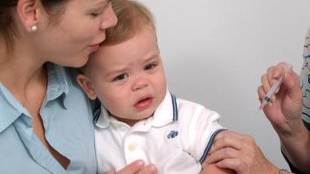 Children exposed to perfluorinated compounds (PFCs), chemicals containing fluorine that are used in a variety of everyday products, from non-stick cookware to paper plates and microwave popcorn bags, may not respond as well to vaccinations against diseases such as tetanus. According to a study in the Journal of the American Medical Association, elevated PFC levels in the blood are associated with a 3-fold greater risk of vaccine failure.

Environmental epidemiologist Philippe Grandjean of the Harvard School of Public Health and his colleagues measured PFC levels in 587 children in Denmark, both while still in utero and at age 5, when the children came in for their booster shots, and age 7. They also measured antibody levels for vaccinated diseases. At that time of their boosters, about 26 percent of the children had low antibody levels against tetanus, and 37 percent also had...

Grandjean suspects the correlation is a result of PFCs harming the immune system. “The data in this paper is very consistent with what has been published in the laboratory-animal literature in the past few years,” Dori Germolec, an immunologist at the US National Institute of Environmental Health Sciences in Research Triangle Park, North Carolina, told Nature. “These compounds are immunosuppressive.”

Previous research by Grandjean’s group has also linked polychlorinated biphenyls (PCBs) to immune damage in an epidemiological study, but the PFCs appear to have a much stronger effect. Some PFCs have been phased out of production in the United States, but Grandjean says the results call for a second look at the way the chemicals are regulated. “There hasn’t been sufficient pressure to make developmental toxicity a priority,” he told Nature. “This is a much larger problem.”